Can an AI be named and registered as an inventor? This question has been a subject of international patent law for years, specifically on the artificial intelligence DABUS. In Germany, the Federal Patent Court (BPatG) decided on this on 11 November 2021. The BPatG partially upheld the appeal of the owner of the AI, whose patent application had previously been rejected because he wanted to name the artificial intelligence DABUS as the inventor.

The Federal Patent Court's leading decision on this case "Food Container" (11 W (pat) 5/21) contains two important principles for computer-generated inventions:
(i) An invention made by an AI is in principle patentable.
ii) The inventor can only be a natural person, never a machine or an AI.

The facts of the case

The developer of the AI DABUS is Ph.D. Stephen L. Thaler (USA), who has been working on artificial intelligence for decades. According to Stephen Thaler, in cycles of learning and unlearning and thanks to neural networks, DABUS could design outcomes that might be patentable.

In cooperation with Artificial Inventor Project, an international team of patent attorneys - including Dr. Malte Köllner - patent applications for two of the DABUS inventions have been filed in various countries and patent offices, including Europe, the USA, Australia, Asia, and WIPO. DABUS was named as the inventor in each case. This in turn was co-initiated by patent attorney Dr. Malte Köllner, the founding partner of our law firm Köllner & Partner. Prof. Ryan Abbot and patent attorney Markus Rieck were also involved. Find more about the DABUS Project HERE.

In Germany, the patent application was rejected. By decision of 9 December 2019, the examining department of the DPMA informed the applicant, that naming DABUS as the inventor in this patent application did not comply with the legal requirements. Only a natural person can be an inventor within the meaning of § 37 and § 63 Patent Act. The applicant appealed against this decision.

In the appeal 4 graded motions were submitted, in detail, the following was requested:

The President of the DPMA joined the appeal proceedings and fully opposed the applicant's arguments. In addition to the question of naming the inventor, the Federal Patent Court also discussed the admissibility of supplementary information in the naming of the inventor in the case of a computer-generated invention. 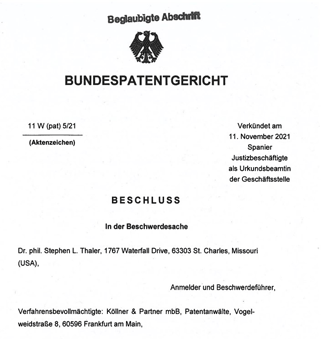 Mr. Thaler's appeal was partially successful. It led to the revocation of the contested decision and the remittal of the case to the DPMA.

The Federal Patent Court first pointed out that under German law, an invention is assessed according to objective aspects. It does not matter whether it is based on conscious thought, systematic work with planned experiment, ents or merely on the exploitation of coincidentally discovered relationships governed by the laws of nature or - as here - on the use of AI (see Busse/Keukenschrijver, PatG, 9th ed., § 4, para. 13).

However, this resulted in two things:

Firstly, there was no dilemma with regard to sticking with the truth by naming the inventor (§ 124 Patent Act). Mr. Thaler's conviction that his AI DABUS, which he had developed, was the inventor, was merely a legal opinion. However, a statement of a legal opinion is not subject to the duty of truth (see also BGH GRUR 2006 -Haftetikett). In this respect, there was no legal obstacle for the applicant Mr. Thaler to name himself an inventor.

Nevertheless, BPatG confirmed Mr. Thaler’s interest in legal protection. His legal opinion that DABUS must be named as an inventor reflects a legal opinion that is now considered tenable by some voices, the BPatG explained. For example, the Federal Court of Australia accepted DABUS as a named inventor in a decision dated 30 July 2021.

The main request (DABUS is the inventor) - and also the first auxiliary request (no one is registered as an inventor) failed because of this.
The second auxiliary request (the addition to the description) was rejected because of the risk of an inadmissible extension. However, if DABUS had been mentioned in the description on the priority date, there would be no inadmissible extension.

Supplementing the designation of the inventor

Concerning the third auxiliary request - supplementing the designation of the inventor - the BPatG ruled against the opinion of the President of the DPMA. The President had argued in vain that supplementary information in the inventor's designation on how an invention was generated should be regarded as a violation of § 7(2) of the German Patent regulations.

The Federal Patent Court disagreed. It was no infringement that the addition "which caused the artificial intelligence [DABUS] to generate the invention" appeared under the correctly indicated inventor's name of the applicant (Stephen L. Thaler). For 7(2) Patent regulation does not contain an exhaustive catalog, additions could be made, the BPatG added.

Looking at the international discussion on DABUS' inventions, the tendency is that the invention is to be considered patentable, but that DABUS may not be registered as an inventor. The decision of the Federal Court of Australia has since been overturned by a higher court. So far, only WIPO and recognized have recognized DABUS as an inventor.

Principle statement of BGH would be welcome

So who can be named or regarded as the inventor of a computer-generated invention? The programmer of the AI? Or rather the operator? These questions also arise after the decision of BPatG. It is to be welcomed that the Federal Patent Court allowed the appeal on points of law and even stated that it would be welcome if the German Supreme Court of Justice (Bundesgerichtshof (BGH)) could comment on the issue in principle.

In the meantime, the President of the DPMA has filed an appeal on points of law. We would like to add: Now it is certain - the BGH will rule on this case.

For questions or further information in the context of computer-generated or computer-implemented inventions, please contact our law firm Köllner & Partner by telephone at +49 (0)69 69 59 60-0 or info@kollner.eu.